Well the month starts off with April fools day so watch out for those prankster out there although I am not sure after the year we have endured there will be too much jovial activity but on the other hand laughter is one of the best medicines available and its FREE.   A few of our group members will be happy with the fact that its FREE so embrace it and use it.

We have all done so incredibly well so far during these uncertain times and I know we are not out of the woods just yet but it is looking a lot brighter out there and things are starting to wake up.  Our peer support group has grown stronger and larger and we have even got a Zoom call with an Indian support group based in India coming up and it fully focuses on that there is a strategy and people available to get you to reach your goals, whatever they are.   JUST REMEMBER YOU ARE NOT ON YOUR OWN.

7th April 2021 sees our 2nd annual celebration of recognising that every stroke survivor deserves support as we are the ones who have lived it and survived the devastation of Stroke.  Please get involved and if you are on twitter please use the #SSD21 and say what has improved or worsened during the pandemic and particular during lockdown so feel free 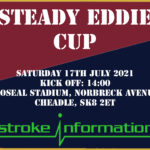 held with each team hosting the other at alternative home ground locations and this match will be for the “Steady Eddie Cup”. Steady Eddie is the mascot of a local charity

Nick shared his thoughts on the charity and the game ahead. “The charity has gone

and Cheadle Heath Nomads have shown. Support is so, so important when you have

support and their tagline is #WeCareBecauseWeveBeenThere.”

“During the lockdown and pandemic everyone has experienced some form of isolation,

well please imagine that all the time, as that is what it’s like after your stroke, you don’t

really see anyone, no-one rarely pops round for a brew or a chat, effectively making the

stroke survivors feel unworthy, StrokeInformation is reducing that isolation. Although the

charity is based over in Stockport, they will help anyone and anywhere at any age, most

people believe that Strokes only affect those at a certain age, well that’s not true and is

FC Humber United Chairman, Richard Smales comments on this latest link for the club “This is another fantastic link and partnership for us as a club, it’s only when you read

affect anyone at any age. With this link between ourselves and Cheadle Heath Nomads

it’s more than just a game of football, we can enjoy the annual pre-season fixture

however know that we are also doing our bit to push this extremely important charity at the same time.

build a strong partnership over the coming years, we are very much looking forward to

the trip across the pennines and to test ourselves against NWCFL opposition too.

grow and move forwards in the right direction.”

Cheadle Heath Nomads Chairman, George Gibbons added; “On behalf of everyone at

Cheadle Heath Nomads, we are delighted and honoured to participate for The Steady

Eddie Cup with our friends from FC Humber United. Nick Clarke and his colleagues

undertake a tremendous amount of valuable work in the community, not only assisting

stroke patients but also their immediate families. Hopefully with the help of both clubs

we can in some way ensure that their amazing work continues. I’m confident that these

FC Humber United, Director of Football Marc Brown: “When myself, Rich and Mark discussed the fixture we wanted to do something that had potential to be an annual event which would raise awareness of a great charity. Having previously been part of a few fundraising events

for Stroke Information it was an obvious decision. George Gibbons and everyone at

Nomads have shown a great deal of enthusiasm to this exciting partnership. The speed in

which all 3 parties have managed to get everything over the line shows the commitment,

desire and forward thinking everyone is which can only make everyone stronger for it.

be able to continue supporting them.”