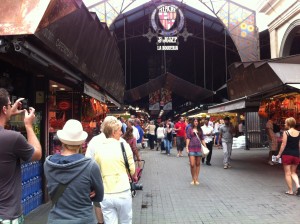 possibly over indulged in Tapas, Cava & San Miguel, but you can’t beat a bit of sun at this time

of year.  Back to grind of work, commutes to Nottingham and the weekly stopover at the best

value guest there is, Hylands, maybe i should put something on trip advisor?

Sept 10th, up for work just like any other weekday morning at 5.30am, but something just

wasn’t right, went into the bathroom and had a shave then i noticed that i could fasten my shirt

let alone wear a tie, went back to the bedroom where I collapsed.   Wifey shot up and asked me

to take 5 and start again but oh no, my health was having other ideas.    Paramedics were called

where they performed the FAST test, we’d both seen it on the telly but this was real.  Face, Arms,

whatever that means.  After a bit of a dilemma, Salford was my option as the hospital as

Stepping Hill wasn’t open until 7.30am.   Wifey called my parents and told them something

showing signs of a STROKE.  Obviously I was out of it, but the 1 thing I do remember is the

yourself for the worst”!!   what was happening to me?   In a nutshell after my first CT scan, it was

discovered that I had a severe bleed on the brain and my lives was going to change.

The plans for my Wife’s 40th birthday had gone for a burton.  The week or so before we had

organised a family meal with Parents, (both sides) Sisters, Brothers in Laws etc at a local hotel.

I had spoilt this event because of my bleeding brain!!

Stepping Hill was my home for the immediate future, feeling nauseous and confused I was put

on B2 (The Stroke Ward) under monitoring, bloods were taken and I was sick, i was hot then

cold and we were experiencing an Indian Summer.  Wifey rang my boss and left a message to

advise that I had been taken into hospital and I was being monitored, but alas it was the

answerphone & wifey duly left a message.   I hated Stepping Hill (only because I was placed on

this ward full of elderly patients)  I wanted to be transferred to the Alex, I got BUPA cover through

Wifey’s birthday came & went and nobody really made the effort, there were the exchange of

cards & presents but everyone was focused on me.

may be fluid on my spine.  Wifey & nurse Sue witnessed it and they watched with amazement as 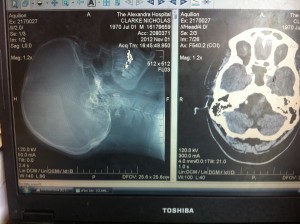 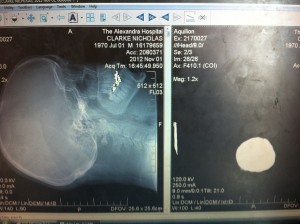